Another thing that is indisputable in Japanese Black breed development since the 1960s is the overwhelming impact of a ‘Tajima’ trend, which accelerates sharply after 1991. The following, simplified chart from Honda et al (2004) reveals the contribution of founders summed up by birth prefecture, and illustrates the impact of Hyogo (Tajima) genetics since 1980.

While Hyogo is the only prefectural herd closed to genetic imports, by 2000 the exported Hyogo genetic contribution to the national herd increased to 40%.  As indicated, Tottori contributions dominated earlier, and would possibly feature prominently in any returned emphasis to overall carcass efficiency.
Chart: Classification of JP herd genetic contributions by the  birthplace of founders The well-documented downside of this single-minded pursuit of a particular meat quality is the previously mentioned increased inbreeding and potentially permanent loss of genetic diversity.

The Hyogo/Tajima trend may now have slowed. Although there were no new herd pedigree analysis studies identified by 2012, analysis of top Japanese sire bloodlines as early as 2007 showed a resurgent emphasis on the production efficiencies of the larger Kedaka and Itozakura genetics in the leading national sires.  By 2010, 59% were dominantly Kedaka, 21% Itozakura and 20% Tajima.

An incisive perspective on retained/loss of diversity across 25 prefecture herds was provided by Honda et al (above) in 2002 using Principal Component Analysis (PCA) to help summarise multi-dimensional information, and Nei’s standard genetic differences.  The sample was 25 prefectures with 2000 or more pedigree-recorded Black Wagyu cows alive and 10yo or less at August 2001.

The useful application of this knowledge for non-Japanese breeders may simply be the clear identification of the five Chugoku cradle prefecture bloodlines as ongoing, individual genetic resources with differentiated performance. The five to follow are:  Hyogo, Tottori, Shimane, Okayama and Hiroshima (#17 – hiding under the 0.4 figure on the PC1 axis). 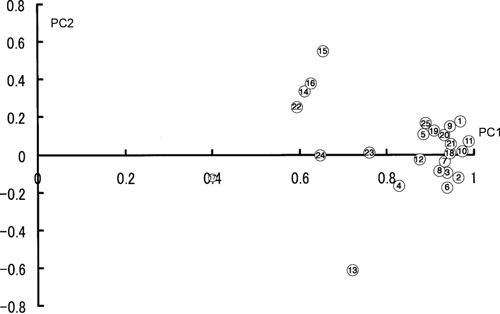 Hiroshima (17) shows the smallest factor loading for the PC1 axis.  The authors explain that because this herd had relatively low relationships with all other sub-populations it seemed to have a unique genetic constitution. Considering the PC2 axis, Hyogo (13) had the lowest factor loading while Shimane, Tottori and Okayama showed the largest.

Taking into account other inbreeding and relationship coefficient data in the study that showed these three as having the lowest (most differentiated) relationships to Hyogo, the cluster arrangements of the PC2 factor were interpreted as mainly determined by relationship with Hyogo.

In addition to the five Chugoku ‘cradle’prefectures, the PCA chart separated three other genetic sub-populations from the conspicuous ‘Hyogo related’ cluster, namely the Kyushu district prefectures of Ooita, Myiazaki and Kagoshima (22,23,24).  These are physically located a short geographic distance from Chugoku across the Kammon strait, still within Black Wagyu heartland.

The authors employed further PC analysis to examine the relative positions of these three (unrecognised as contributors to genetics beyond Japan) to the 25 and then constructed the following dendrogram, which provides a complementary, graphical view of relationships between all 25 genetic subpopulations, with the graphic clearly contrasting 17 prefectures of commodity herd genetics (related most to Hyogo of the Chugoku group) with the more differentiated herds at base.

Fig. Dendrogram showing the genetic relationships among the 25 subpopulations based on Nei’s standard genetic distance. The authors concluded that the Chugoku sub-populations, long a source of genetics for the entire national herd, have each maintained unique genetic compositions ‘at some level’.  They called for maintenance of genetically different sub-populations to support breed improvement and emphasis on traits such as reproductive performance, maternal ability and growth rate.

An obvious danger lies in the scale of Black Wagyu production in the Chugoku district, compared with other regions in Japan. Chugoku herds today are relatively small. (See herd population data under Japanese Production Systems.)

Before leaving the 2002 study, it is interesting to look at one further table.  In considering ‘why ?’ eight sub-populations stood apart in PCA clusters, the scientists analysed prefectural herds to determine proportions of  reproductive cows within each produced by own ‘prefecture bred sires’ (B)  and own ‘prefecture bred cows’ (C).